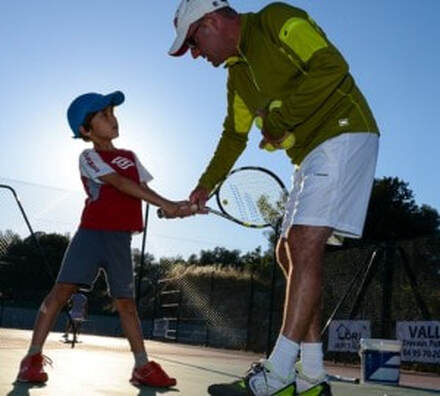 MY MISSION IS TO HELP PEOPLE DEVELOP LIFE  SKILLS THROUGH TENNIS AND PROVIDE THEM WITH THE BEST TRAINING POSSIBLE.

Internationally recognized as one of the world’s top tennis coaches, Warwick Bashford is acknowledged not only for his abilities as a tennis consultant, he is also recognized as a visionary and master motivator, inspiring people from all walks of life.

Born in South Africa and educated in England, Warwick began his career in tennis on the European Circuits. At the age of 18, Warwick’s dream of becoming a professional player was shattered when his body and back constantly gave in to the high demands of professional tennis. With an ATP ranking amongst the top thousand in men’s tennis, Warwick decided to become a tennis coach. His real interest was in the technical, psychological and physiological intricacies of the game.

After graduating and achieving the highest coaching qualifications from the Lawn Tennis Association in England, Warwick decided to further his coaching experience at the well known Paris based Bollettieri Tennis Academy in France. As an apprentice Warwick was a quick learner becoming fluent in French in only six months.

It was at the French Open Warwick really got a taste of professional coaching when he was asked to help Michael Chang prepare for Roland Garros.

During nine years, Warwick went on to coach club tennis in France, honing his skills until an opportunity early in 1997, when one of France’s top female juniors, Amelie Mauresmo asked him to become her personal tennis coach.

For the next ten years Warwick’s tennis and consulting expertise was sought after not only by tennis clubs but also world ranked players on both the ATP & WTA tours.

In 2003 Warwick moved to America and continued his coaching and consulting services for juniors and clubs alike.

Advised and counseled elite athletes and coaches around the world, including:

Certified with the following organizations:

“No matter what your Level, Nationality, or Color,

we are all Champion People, as long as you believe nothing is impossible.”